We know very little about her story. All we really know is that she sinned. She was caught and she was about to die. Not really an experience any of us strive for. Not a legacy that we hope to leave. But this piece of her story—this is all we know of her.

The scene is set: Jesus has spent some time away at the Mount of Olives. Early in the morning, He comes down to the temple and the Bible says, “All the people came to him, and he sat down and taught them.” As he is teaching, the scribes and Pharisees bring in this woman who had been caught in adultery. They try to trap Jesus, “The Law says to stone her, what do you say?”

Imagine her fear. Just for a second, imagine being in her shoes: You sinned. You were pushed in front of all these people who were learning from the Son of God. You stand there in front of all of them knowing that what the Pharisees are saying is true. You will be stoned. You will be killed for your sin.

Historically speaking, there are a variety of methods in which they stoned women. One of them involves digging a hole in the ground, putting the woman inside, and burying her up to her shoulders so that just her neck and head were exposed. It’s as if to say, we’re going to conceal your filthy body but leave just enough of you visible so we can watch you being shamed and tortured.

Jesus was asked this question by the Pharisees and what’s his next move? He bent down and put his finger in the sand. For a split second, the woman must have stopped breathing. “He is going to start digging. This is the end.”

Just then, his finger moves across the sand in a line. Is he drawing the boundaries of the hole? Is he writing out a huge, “YES, STONE HER” for all the people to read? Suddenly, He speaks: “Let him who is without sin among you be the first to throw a stone at her.”

Could she have heard him correctly? Did he confront the Pharisees with an impossible task? Surely they cannot throw a stone. Surely they will not challenge him and claim to be without sin. She breathes again. She can breathe. And she is still regaining her breath when He asks where everyone is. They have left—no one is there to condemn her. And then she hears the words that MUST have transformed her life, “Neither do I condemn you. Go and from now on sin no more.”

I imagine she just stood there for awhile, unable to move. She had to be flooded with shock and relief, still stunned by Jesus’ challenge for others to stone her only if they were without sin. And even more stunned to know they dropped their rocks and left. The questions she must have been left with! Why would He save me? Why would he not condemn me? Why did He stop in the middle and write in the sand?

We still ask that last question, don’t we? What was He doing? What did he scribble? What does this action mean? In my uneducated and humble opinion, could he have been showing her on a grand scale who He is?

Our stories are not so different from this woman’s. Sin deserves punishment. And, as this story reiterates, we have all sinned. Maybe her stone looks big to us, but not in the eyes of God. To Him, they all look the same. With one flick of a finger, He clears them. Imagine, then, how many He can clear with two outstretched arms.

I don’t know what it was like to be that woman, but I know what it’s like to feel the weight and shame of my sin and imperfections, sometimes even amplified by the pointed fingers of others. What little I know of her story has also been true in my own story—with my repentance, He flicks away my sin and shame and He transforms. 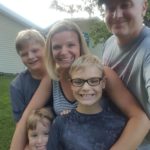 Cori Cheek is wife to Jeremy and mom to three fun and spirited boys. She loves spending time with her family and all things creative arts. These days, you can usually find her on the soccer or football field, cheering on her sons.

I'm Mallory. I tell stories, ask tons of questions, unenthusiastically appreciate experiential learning and often believe that both birds and treadmills are out to get me. Click here for more about me.

Sign up to get new posts right in your inbox!