When I woke up on the same Saturday that Darren speaks to here (but two hours later than he did), I shuffled out into the living room, my eyes still opening and my bedhead reaching new heights, to see him writing. He acknowledged me but kept on typing, as if he could not get the words out fast enough. (As a writer, few things make me more envious than that.)

I love that he writes to process big feelings. I appreciate that he wants to be a part of what I am doing here, and that he is willing to so vulnerably and beautifully share himself in this space. We have big dreams of writing together in the future, but I think this is a wonderful start in giving you all a peek into who this guy is that I so often write about.

This is [a piece of] his story. It tells of brokenness, pain, disappointment, resilience, healing, and oh-so-much faith. I don’t know that I’ve ever met a peer with a faith like his (he is so much like my father); his faith teaches me and encourages me when I am in my most grounded moments. Sometimes, yes, it makes me want to rip my hair out because I just cannot imagine how “God is here? We’ll survive this? There is a bigger picture?”

Darren is a gift to me, and I know his deep faith brings life to those around him. Good people, I’m so honored to introduce you to my husband…

Dog puke is not especially loud. It isn’t like Roger, our one-year-old beagle, yells out “Oh, man, hold my hair!!” and proceeds to wretch out last night’s dinner. No, it’s only a tiny, faint smack from him opening his mouth particularly wide. It was enough to shock me out of sleep this morning before 6am. On a Saturday. I cleaned up the mess on our comforter, tried to go back to sleep, quickly gave up, and opened the ESPN app on my phone to start the day.
And I couldn’t be happier.

It may be that I am a natural optimist, so things tend to roll off my back—or that life has just been really good for a few years. Mallory and I have been married for less than a year and we don’t yet have all of the typical “grown-up” responsibilities that many others do. We rent an apartment, are kid-less, don’t have stress-inducing jobs, and have wonderful families and friends. Again – life is good. Now, we do have our fair share of grown-up, rocky past experiences, which include damaging relationships with dismissive partners, divorce, debt, demeaning jobs, depression, addiction, insignificance, and self-destructive behavior.

Life can be cruel, swift, and ruthless. But…
Those circumstances are painful and were extremely difficult to walk through. But…
Some days seemed too much before they even started. But…
Some of those experiences still have a practical, noticeable impact on our lives. But…

For me, there is always hope and a quiet understanding that life is bigger than whatever I’m currently facing. The “big picture” is incredibly comforting and stabilizing for me. I personally anchor myself to the truth that a season doesn’t last forever, and I’ll likely have more chances to find contentment again. This may not be something you can relate to in your process, but it offers me so much perspective.

Bigger than the notion that life holds many seasons, I have a lifetime of knowing my Creator. I can remember camping out in the backyard during the summer when I was young. My dad and I were in the tent and we started talking about God; I can so clearly remember how real and close He felt in that moment. Jesus wasn’t distant. Even as a very young boy, I just knew that He loved me and that I’d see Him someday when life on Earth was over. I loved knowing that God was watching over us all. I am so thankful that my parents showed me that our interaction with Him could be informal, natural, and flowing out of mutual love.

Years later, I would have to enter the first derailment of my world. My parents divorced and I took it very hard. I struggled for years to find stability, which was made difficult by frequent moves, leading me to attend 7 different schools before I graduated. I eventually found myself feeling more stable—and I met a girl. We were young, but it made sense; I was so thankful that my generation would stop the pattern of divorce in our family. I had vowed as a young man that divorce would never be a part of my life.

Less than 3 years later, my wife told me she was “done” during one of our marriage therapy sessions.

This was the second derailment. It threw me for a loop and I saw some dark days. I did healthy things, like deepened my friendships with good people who loved me, poured into the Word, and spent a lot of time taking quiet walks through the woods by my home. At times, however, my reactions to this derailment weren’t so healthy. I sometimes drank heavily, closed off the world, and struggled against depression. I was so ashamed that I was divorced. I didn’t understand how something I was so strongly opposed to, and fiercely determined to overcome in my family, could still happen to me.

God remained. A year after my divorce, I found myself experiencing life with a new appreciation. I wrote music. I bought a Harley for dirt cheap. Time and money became abundant because I was freed from poor choices made in the past. “Out of the ashes” means something to me.

Then, I met Mallory and my life saw a new high-score for contentment.

So, if you are in a season like we are, where life has more rainbows than raindrops, enjoy it and be present. If you are in the trenches, remember that there is so much more—both in this world and the one beyond us. The beauty is that no matter where you currently are, God is no less present, and I find that to be incredibly satisfying.

That is why I can say that I am so happy, even when my alarm clock is a dog barfing in bed on my one day a week to sleep in. 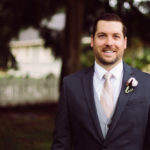 Darren Redmond loves Seattle sports teams, playing guitar, and basically anything on wheels. He works in the hot rod & racing industry, rides his motorcycle for as much of the year as Ohio seasons will allow, and prides himself on his puns. He lives in Dayton with his wife, Mallory, and their dog, Roger Redmond.

I'm Mallory. I tell stories, ask tons of questions, unenthusiastically appreciate experiential learning and often believe that both birds and treadmills are out to get me. Click here for more about me.

Sign up to get new posts right in your inbox!